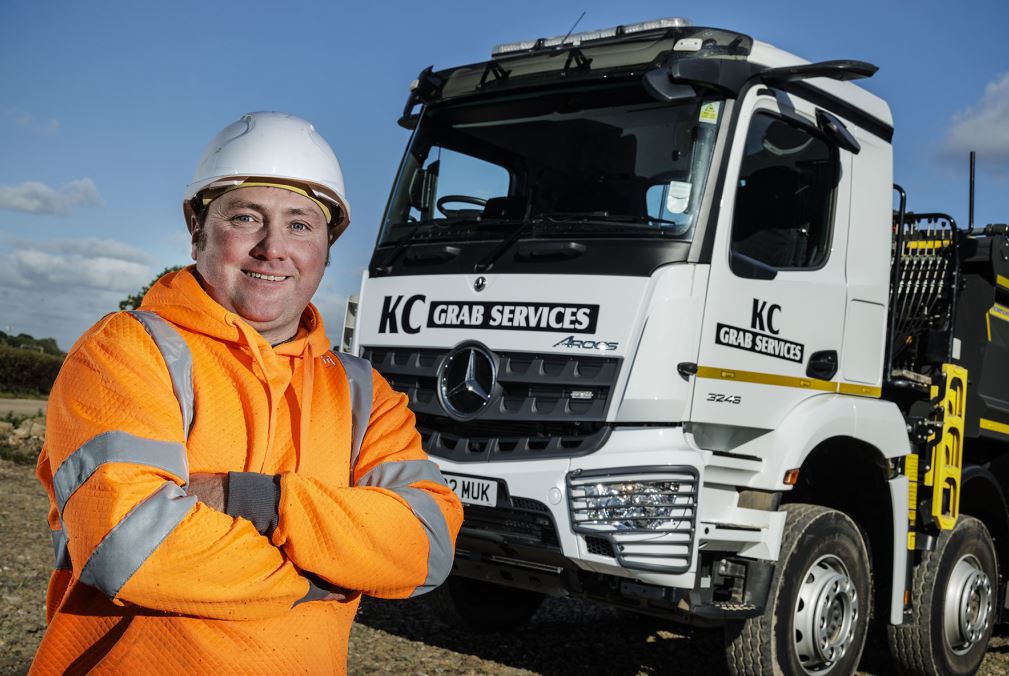 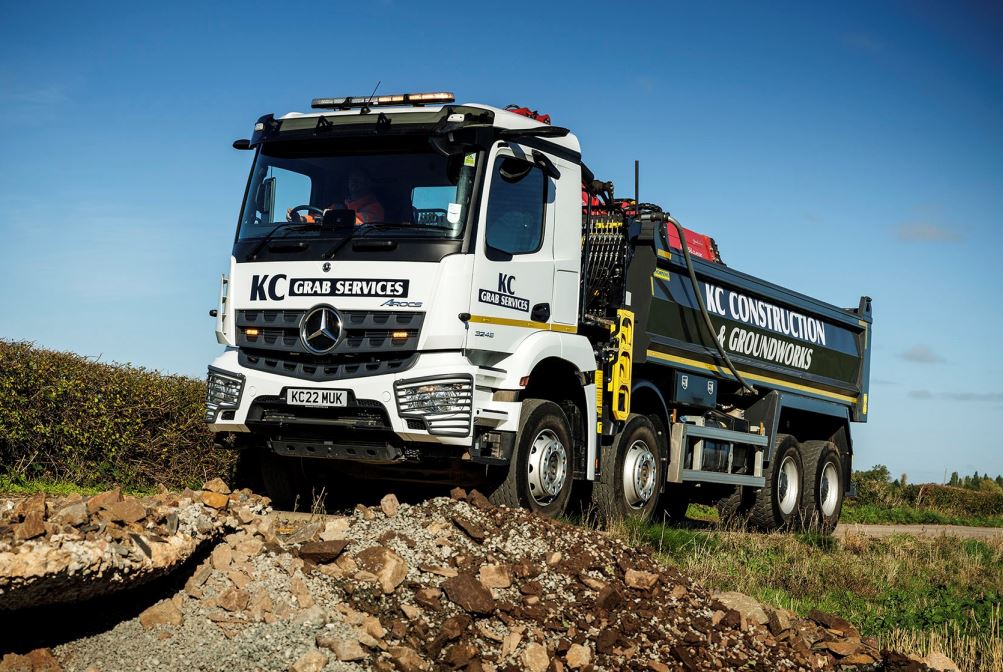 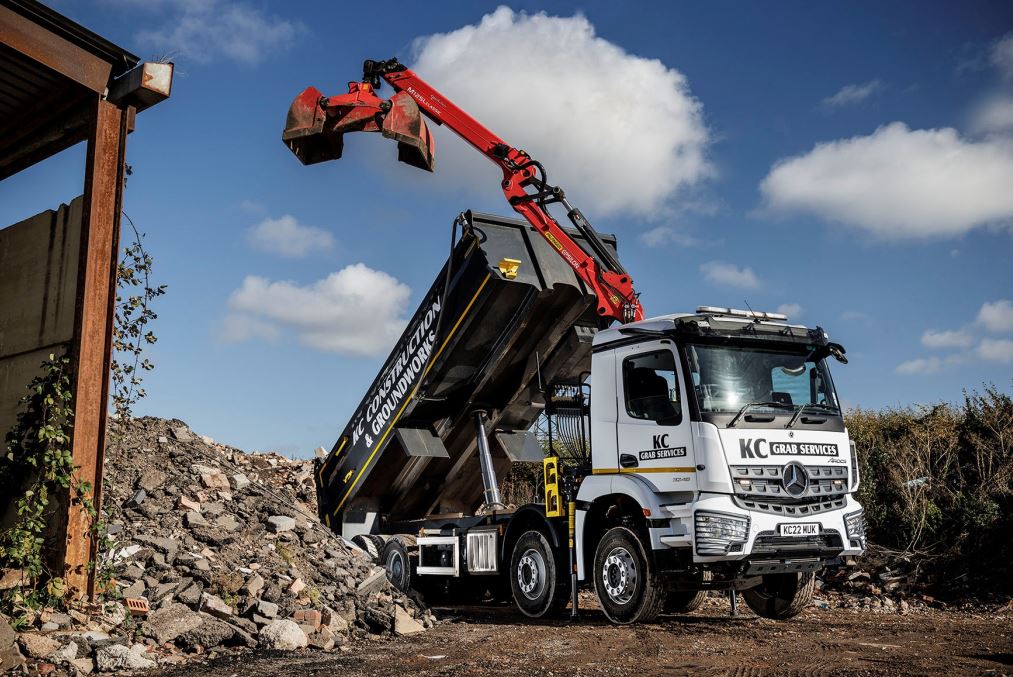 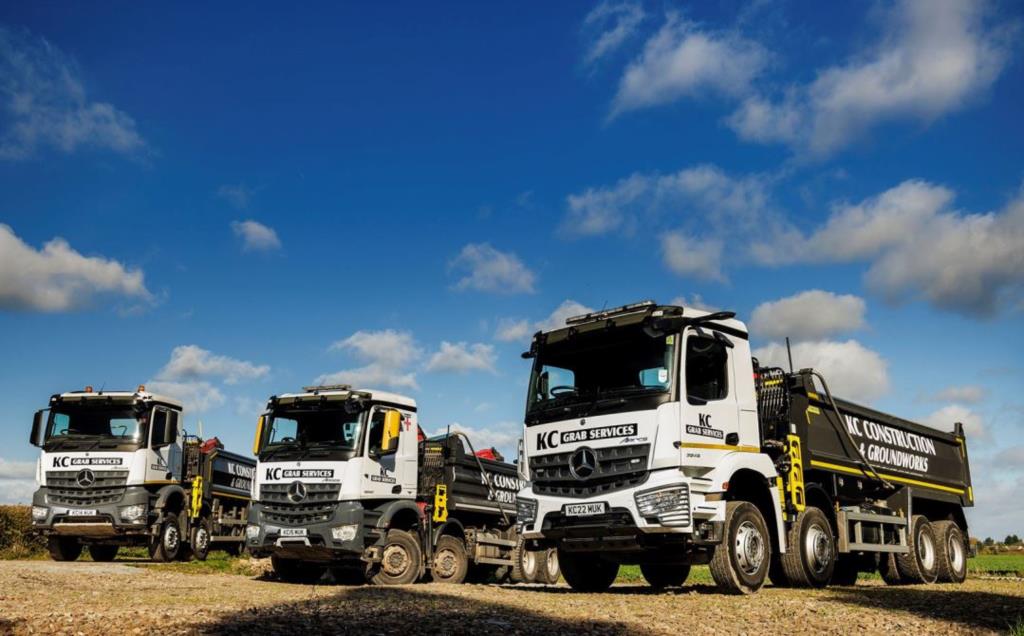 So pleased was Nuneaton-based KC Construction with the two pre-owned Mercedes-Benz Arocs tipper-grabs it purchased last year, that it has now returned to Dealer Midlands Truck & Van for a new vehicle from the same muscular model range.

Unlike its two predecessors, the latest came with a full complement of advanced technology. Highlights include MirrorCam, the manufacturer’s ground-breaking, camera-based replacement for conventional mirrors, and the radical Multimedia Cockpit dashboard, with its twin, tablet-style screens.

All three eight-wheelers have ClassicSpace cabs. However, while the used Arocs 3240s have short S-cabs with170mm engine tunnels, the new Arocs 3246 has the roomier M-cab and a 320mm tunnel, so driver Ben Thompson sits correspondingly lower.

Like its predecessors, Ben’s Arocs has a roof-mounted light bar and sun visor, and shares the same combination of high-strength Thompson Loadmaster tipping body and Palfinger Epsilon M125L crane with Kinshofer clamshell bucket. The new truck stands out, though, thanks to its colour-coded bumpers and mudguards, and protective headlamp grilles.

KC Construction was established a decade ago by Kevin Casson. It operates in Coventry, throughout Warwickshire and beyond, and has forged ahead strongly over the last three or four years.

The company was already a customer of Midlands Truck Van before it bought its first Arocs. “Our only other truck is by another manufacturer, but it’s been maintained at the Mercedes-Benz Dealer’s Coventry workshop for some time now,” explained Mr Casson. “The service is excellent, not least because they have a technician who’s really good with electrical issues.”

KC Construction acquired its first Mercedes-Benz in April 2021, and the second three months later. “The Dealer did a great job of sourcing and preparing both trucks,” recalled Mr Casson. “They’ve been absolutely fantastic and the drivers love them.”

The Mercedes-Benz Arocs is purpose-designed for construction-related applications. “It’s extremely robust and ideally suited to our kind of work,” he said. “The Arocs performs particularly well in quarries, where the suspension system excels and the high ground clearance also helps. At around 16 tonnes, payloads are pretty good too.”

Commenting on the decision to purchase a new vehicle this time, he continued: “Business has been good and we felt the enhanced warranty would give us that extra bit of security. We trialled one of Midlands Truck & Van’s demonstrators for a couple of weeks and were really impressed.

“We’ve gone for the bigger cab and more powerful engine, and have also added some extra features. For example, the SM UK camera system has been integrated with the Multimedia Cockpit, so we don’t need an extra screen, and we’ve also specified Thompson’s on-board weighing system. The new truck is a great flagship for our business.”

Driver Ben Thompson is every bit as enthusiastic. “My Arocs feels as though it’s built to carry weight over challenging surfaces – off-road it takes the bumpiest terrain in its stride,” he reported. “I also like the new dashboard, which looks great and is really easy to operate.

“MirrorCam takes a little bit of getting used to but once you’ve done so there are major benefits. The fact that the cameras are mounted on the roof means that on narrow lanes I’m not dragging them through hedges, while the lenses don’t get anything like as dirty as mirrors when I’m working in a quarry. Plus, of course, removal of the mirrors also eliminates a big forward-facing blind spot.”

Like its two used Arocs, KC Construction’s new truck is now being inspected and maintained under a Mercedes-Benz Complete Service Contract. “We use Midlands Truck & Van’s branch in Smethwick as well,” said Kevin Casson. “As with Coventry, the back-up is brilliant.” 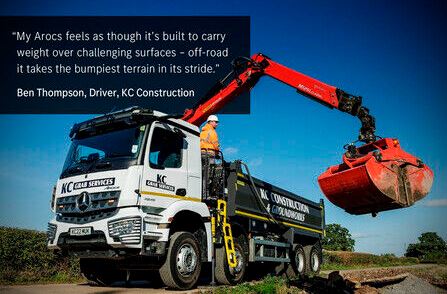