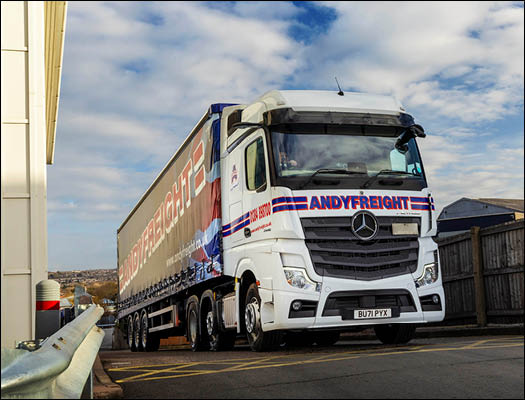 Andyfreight is enjoying a welcome increase in fuel efficiency from its latest Mercedes-Benz Actros trucks – the Black Country haulier has just added another three tractor units to the six supplied by Dealer Midlands Truck & Van last year, and will be taking delivery of a further eight in the spring.

With average returns of 11.27 mpg, even Andyfreight’s previous-generation Actros are half a mile per gallon ahead of its trucks by two other manufacturers, while a single unit from a third brand trails a lot further behind.

Andyfreight commissioned its first six Actros from the current model generation in 2020. Despite being fitted with conventional mirrors rather than the acclaimed MirrorCam system, those trucks have consumed significantly less diesel and are returning 11.9 mpg.

Now, the operator’s MirrorCam-equipped Actros are putting even more ‘clear blue water’ between the best and the rest, with returns up to 12.03 mpg. As well as increasing safety, MirrorCam boosts economy – Mercedes-Benz Trucks estimates by up to 1.5% – through reduced wind resistance from the compact and streamlined camera housings.

The Mercedes-Benz truck’s impressive fuel-efficiency and popularity with the operator’s drivers, coupled with Midlands Truck & Van’s outstanding aftersales support, explain why Andyfreight is replacing other vehicles with more Actros.

Operations Manager Dan Harris confirmed: “We are certainly favouring Mercedes-Benz at the moment, not least because the Actros is so competitive in terms of overall lifetime costs. We don’t tend to run at maximum weights but on a like-for-like basis it’s a lot better on fuel than any of the other trucks we’ve tried, particularly the new model with MirrorCam.”

Established by Managing Director Andy Pountney with a single 3.5-tonne pick-up in 1986, Andyfreight provides a comprehensive portfolio of flexible and cost-effective nationwide haulage, distribution and warehousing services to customers large and small.

The company has been running Mercedes-Benz trucks for more than 30 years, some of the first being pre-owned examples that it purchased from the manufacturer’s Wentworth Park facility, near Barnsley.

Once its remaining seven new Actros are in service, Mercedes-Benz will account for some two-thirds of Andyfreight’s 35 tractor units. It also runs five 18-tonne curtainsiders with sleeper cabs and tail-lifts, every one of which wears a three-pointed star. The back doors of these vehicles, like those of its semi-trailers, bear the operator’s trademark image of a baby, and the message: ‘Just about the only thing not delivered by… www.andyfreight.co.uk’.

Acquired with the competitive funding support from Mercedes-Benz Finance, the 17 units it ordered for 2021-22 are all Actros 2545 variants with 12.8-litre in-line six-cylinder engines that produce 330 kW (450 hp). All have been specified with roomy BigSpace cabs, apart from three flat-floored StreamSpace variants that Midlands Truck & Van supplied from stock last summer.

Predictive Powertrain Control manages gear changes and ensures that full use is made of the Mercedes PowerShift 3 transmission’s Eco Roll function to maximise fuel-efficiency and reduce emissions. The latest, enhanced version covers virtually all A roads, and many B roads, and takes account not only of topography but also of corners, roundabouts, junctions and traffic signs to deliver fuel savings of as much as 5%.

Other standard features include upgraded interactive versions of the stylish and intuitive Multimedia Cockpit, which replaces traditional switchgear, and Active Brake Assist 5, the latest emergency braking aid, which now employs a camera as well as radar, and is even more responsive to pedestrians crossing the truck’s path.

Dan Harris continued: “We live in a world where everything is advancing and you have to be at the forefront of technology if you want to remain competitive. I can see every HGV being mirrorless before very long.

“The drivers certainly got to grips with MirrorCam very quickly and they’re very positive about it now. Reversing is a lot easier now and by removing that blind spot Mercedes-Benz has made a massive contribution towards safety. The fact that the cameras also help to save fuel is an added bonus.”

Andyfreight’s Actros are inspected and maintained for the first two or three years of their lives under Mercedes-Benz Complete Service Contracts. “The support we receive from the team at Midlands Truck & Van’s Wolverhampton workshop is superb,” enthused Mr Harris.

“They’ll collect our trucks on Fridays and invariably have them back with us by the Sunday lunchtimes – it’s a very slick operation and by far the best service we’ve received from any Dealer. Given that we’re incredibly busy at the moment, this level of back-up is priceless.” 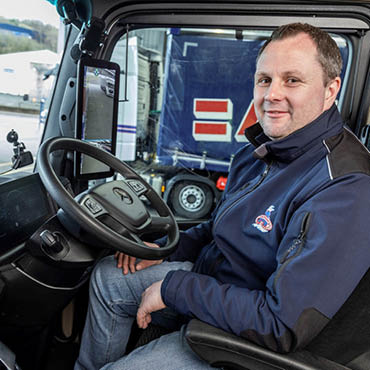 Focused on the future: “You have to be at the forefront of technology if you want to remain competitive,” said Andyfreight’s Dan Harris 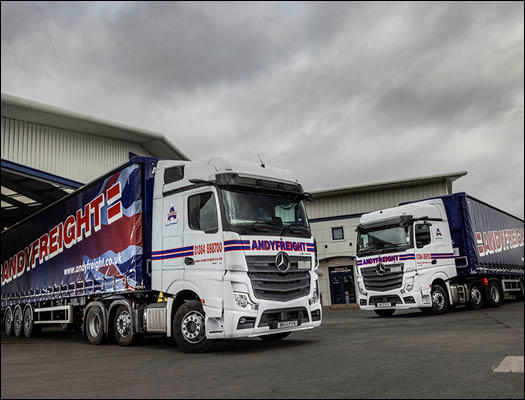 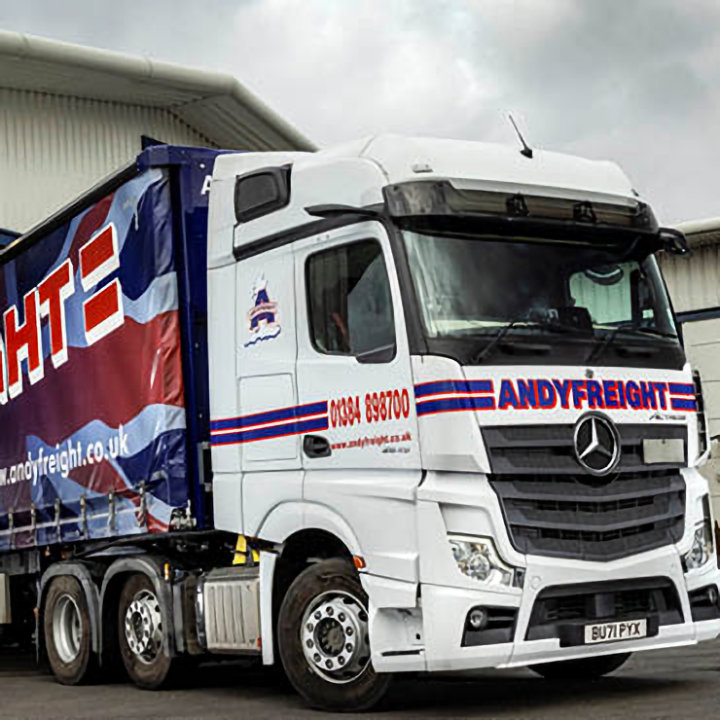