Best of breed: The stunning Mercedes-Benz Vito Sport with dog-carrying conversion which Midlands Truck & Van will be presenting at this week’s Crufts

Midlands Truck & Van sets its Mercedes-Benz show on the road

The Dealer has commissioned a Mercedes-Benz Vito van with bespoke canine carrying conversion, for display on its stand at Crufts 2020, starting on Thursday (5 March).

Then, in April, Midlands Truck & Van presents a truck and no fewer than five vans – including two fully electric eVito models – at the Commercial Vehicle Show. All will be in the liveries of high-profile customers of the Dealership.

It will be the first time a Mercedes-Benz Dealer has exhibited at the UK road transport industry’s flagship event, and represents a substantial investment by Midlands Truck & Van.

The company’s decision to attend reflects its determination to provide the best possible representation for the brands it represents, and also to ‘spread the word’ about the exciting developments currently taking place within its own business.

Work is now well underway on the construction of a £7-million Dealership in Birmingham. Scheduled to open in October, its new headquarters is taking shape on a seven-acre brownfield site in the city’s Smethwick district.

Meanwhile, Midlands Truck & Van recently spent £3 million on the acquisition and refurbishment of the former Mercedes-Benz of Coventry car dealership in Whitley. It is now one of the country’s biggest Mercedes-Benz van showrooms.

The Dealer’s third branch, in Willenhall, Wolverhampton, is also still relatively new, having opened at the end of 2015. It was developed at a cost of £4 million.

“These are hugely exciting times for our business,” declared Midlands Truck & Van Managing Director Steve Hunt. “We want to shout about our successes, and our heart of England locations mean the NEC is the perfect venue at which to do so. We look forward to welcoming established and prospective customers, as well as representatives of the manufacturer and other guests, to our stands at Crufts and the CV Show.”

Midlands Truck & Van will also be participating at a host of other events this year. Steve continued: “The latest Mercedes-Benz Trucks, FUSO light trucks, and Mercedes-Benz Vans ranges lead the field in terms of technological innovation. As a result, they offer exemplary levels of reliability and costs of operation, safety and driver appeal.

“Our role is to deliver the first-class experiences that customers for vehicles bearing the three-pointed star or three diamonds badges are entitled to expect. The substantial investments we’re making in our branch infrastructure, and in the development of our people, reflect this company’s commitment to building partnerships with operators that stand the test of time.”

The dynamic Vito Sport 116 CDI which Midlands Truck & Van is taking to Crufts was converted to ‘dog walker’ specification by Vantastec, of Ystrad Mynach, Caerphilly. Despite being an L1 (compact) crew van model with a second row of seats, it offers flexible, robust accommodation for up to five dogs of varying sizes.

Two cages are mounted to the floor rails, and there are two smaller ones above, one of which can be divided in two. Each cage has ‘escape hatch’ for use in the event of an accident, and the entire system can be unbolted and removed completely.

The roll call of vehicles on the Midlands Truck & Van stand at the Commercial Vehicle Show which runs from 28-30 April will include new electric eVito models offering zero tailpipe emissions, in the colours of Europcar and Travelodge. Also appearing will be Diesel-engined Citan, Vito and Sprinter models belonging, respectively, to Tructyre, Really Awesome Coffee, and Clancy Docwra, and a tractor unit from the new Actros range – International Truck of the Year 2020 – in CEVA Logistics livery. 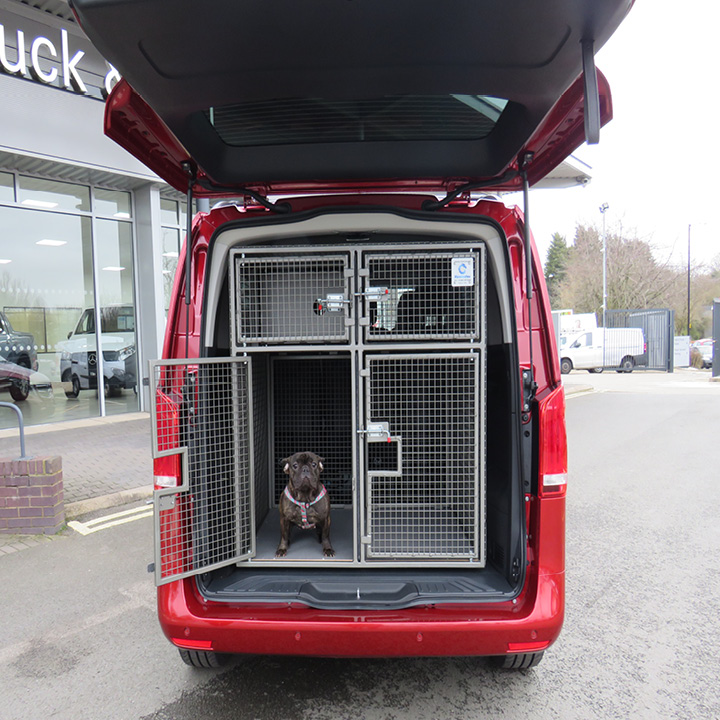 Try this for size: French bulldog Piglet can scarcely contain her excitement at the prospect of a ride in the Mercedes-Benz Vito Sport with Vantastec conversion 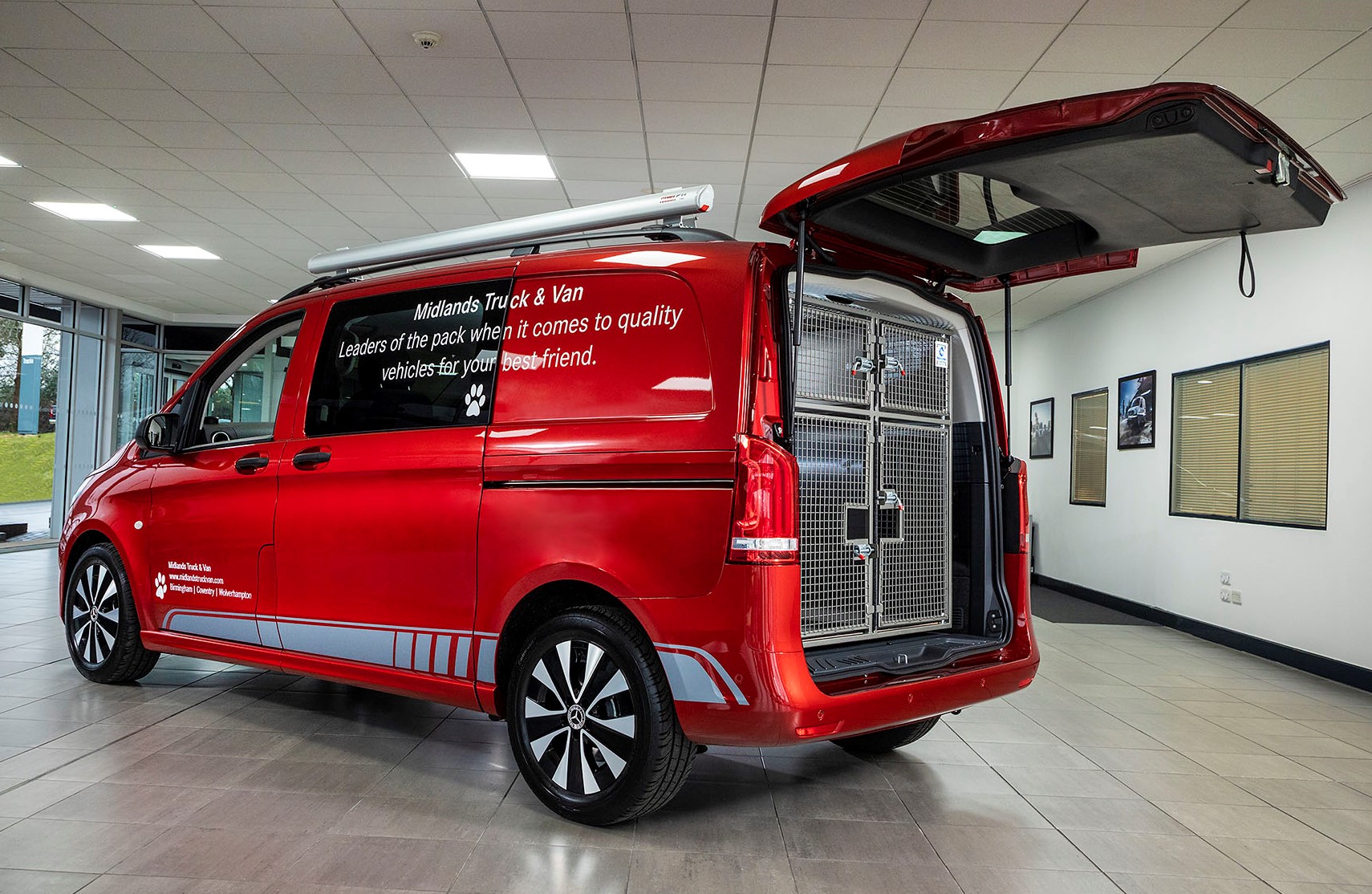 A dog walker’s dream: The Mercedes-Benz Vito Sport features a bespoke Vantastec conversion and can carry up to five pets of different sizes. 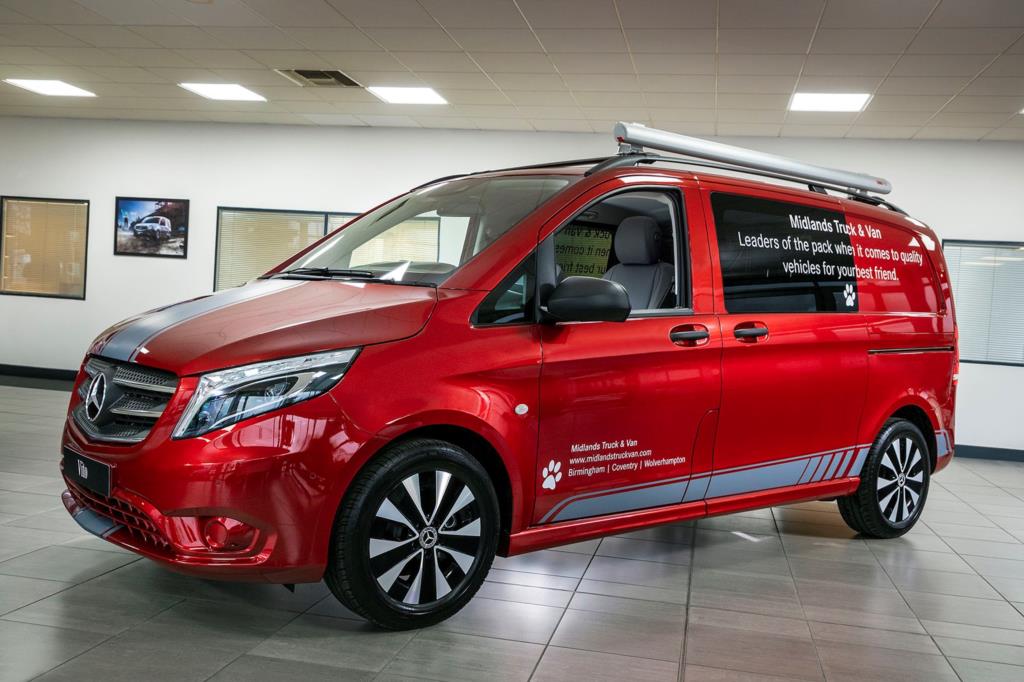