A Birmingham-based steel stockholder has become one of the first customers in Britain for a vehicle from the latest FUSO Canter light truck range.   FH Warden (Steel)’s new 7.5-tonner features a redesigned cab with eye-catching ‘face’, as well as improvements over the outgoing model in comfort and safety.

The Canter 7C15 was supplied by Midlands Truck & Van, and will be maintained under a three-year Best Basic Service Plan at the state-of-the-art facility in Smethwick that was opened by the Dealer in 2020.

Thanks to a newly developed, compact exhaust system, the new FUSO Canter meets the EURO VI – STEP E emission standard. Improved insulation means the cab interior is quieter, while reinforced rear underrun protection minimises the impact in the event of an accident.

FH Warden’s truck is powered by a 3.0-litre common-rail turbodiesel that produces 110 kW (150 hp) and an impressive 370 Nm of torque, and is paired with a DUONIC dual-clutch automated manual transmission. Its 23ft platform body is by Fred Smith & Sons, of West Bromwich.

Director Dave Hughes is well placed to appreciate the advances that FUSO has made with its new range – this is the third Canter that his company has purchased from Midlands Truck & Van since it resolved in 2013 to dispense with third-party contractors and bring its local transport function ‘in-house’.

Key to the Canter’s appeal for FH Warden, is the industry-leading carrying capacity that translates into exceptionally high productivity. “It’s all about payload,” explained Mr Hughes. “We can get nearly 4.0 tonnes on the back of this truck. That’s the best part of a full tonne more than you’d achieve with a conventional 7.5-tonner.”

FH Warden takes on a broad range of fabrication and manufacturing projects. Its steel sheets and plates are available in standard sizes but can be cut to meet specific requirements, while the company also supplies steel offcuts in a huge variety of shapes and sizes.

Although FH Warden serves commercial, industrial and private customers nationwide, most deliveries are made within a 10-mile radius of its base in Saltley. It is a heavily built-up area in which the vehicle’s agility also comes into its own.

“We’re working on congested streets and have to access some pretty tight spots,” continued Mr Hughes. “The Canter’s compact footprint and very tight turning circle make it extremely manoeuvrable, which is another big advantage.

“It’s also cost-effective to run, being both fuel-efficient and reliable. The new truck replaces one we bought in 2016, which now has 107,000 miles on the clock and has been very good.”

Midlands Truck & Van is a member of the Mercedes-Benz Trucks UK Dealer network and, like its fellow franchisees in Britain, also sells and supports the FUSO light truck range from 3.5-8.55 tonnes GVW – both brands are part of the Daimler Truck family.

Dave Hughes had praise too, for Midlands Truck & Van’s Canter Sales Specialist Martyn Hill, and for his aftersales colleagues.

“Martyn’s a real credit to the Dealer,” he said. “He’s attentive, pays great attention to detail, and is concerned to ensure that our experience of his company is entirely positive. It’s also very apparent that Martyn loves the Canter, as he takes every opportunity to promote its attributes.”

Mr Hughes said the combination of FUSO’s three-year, unlimited mileage warranty, and the maintenance contract that FH Warden had taken out, gave him all-important peace of mind. “When our truck is due in the workshop the Dealer will collect it on a Friday afternoon and return it on the Monday morning, which is really helpful,” he added.

FH Warden was established circa 1850 by Francis Hollins Warden. It was subject to a management buyout in 1995 by Mr Hughes’ parents, Dave senior and Pat. They remain the sole owners of the business, for which daughter Lucy also works in an Accounts role.

FUSO fan: Dave Hughes is pictured with FH Warden’s third Canter, one of the first from the all-new light truck range

In and out: FH Warden’s all-new FUSO Canter is pictured with the 2016 model it has replaced, and which is now being offered for private sale 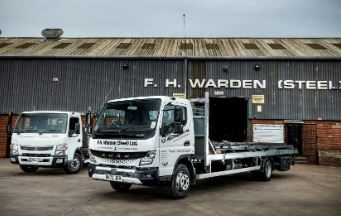 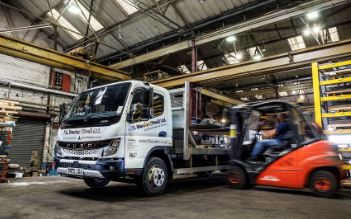 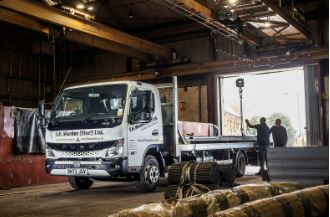 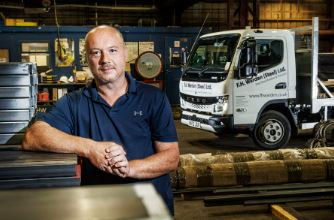