Municipal vehicle specialist CP Davidson & Sons (CPD) has delivered its first trucks to North Warwickshire Borough Council. What’s not new, though, is the choice of chassis – all three are Mercedes-Benz Econics supplied by Midlands Truck & Van.

Of the 16 trucks the local authority uses to collect domestic and trade waste, 12 are 26-tonne Econics. Its Waste & Transport Manager John Rhodes enthused: “My preference is definitely for the Mercedes-Benz. It offers proven reliability and performance, and leads the field in terms of safety. The aftersales support is first class as well.”

Prime contractor CPD, meanwhile, is a Qualified Partner of Mercedes-Benz Trucks, and the overwhelming majority of the refuse collection vehicles that leave its factory in Chorley, Lancashire, are based on the manufacturer’s low-entry chassis. “We know the Econic inside out, and would always recommend it,” said Operations Director Robert Davidson.

Fitted with Terberg split bin lifts, CPD’s 19m3 capacity Titan XLS bodies offer class-leading payloads, 14-second compaction cycles, and – with only 890rpm required from the engine – fuel savings worth up to 15%. At 75dB(A) they are exceptionally quiet too, while short rear overhangs also contribute to manoeuvrability.

The smoothly curved sides of the truck bodies carry messages exhorting the residents of towns such as Atherstone, Coleshill and Polesworth, as well as the former mining villages and rural areas that make up the borough, to protect themselves and others by observing pandemic protocols. Hand sanitisers have also been installed in the cabs, for use by crews during their rounds.

North Warwickshire Borough Council conducted a comprehensive tender process before awarding the contract for the three new trucks. Mr Rhodes recalled: “CPD’s was the standout bid, achieving top scores. The bodybuilder provided us with a demonstration unit for trial and hosted us on a tour of its production facility prior to the onset of Covid-19. Robert Davidson and his team could not have done more.” 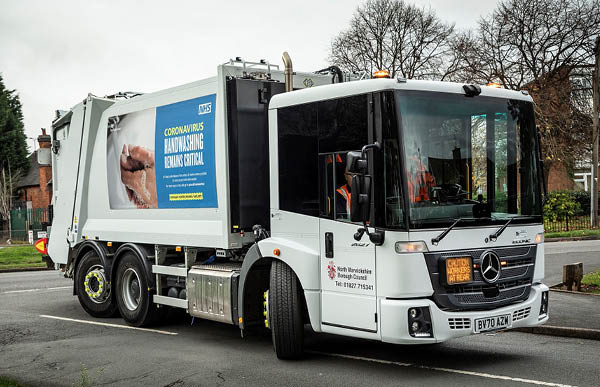 The new trucks have bus-style nearside doors which are glazed to full height. This feature, combined with the vehicle’s deep, wraparound windscreen, and a low seating position that allows drivers to make direct eye contact with vulnerable road users at junctions, has earned the Econic a top, five-star Direct Vision rating from Transport for London.

The specification also includes Active Brake Assist 4 emergency braking technology. Programmed to recognise other vehicles at higher speeds, as well as pedestrians when moving more slowly, and is capable of bringing the truck to a complete stop.

Mercedes-Benz Trucks’ Blind Spot Camera System comprises a seven-inch monitor, two cameras on the exterior mirrors, and others facing front and rear, and Sideguard Assist supports the driver when making left turns and changing lanes in busy environments where visibility may be restricted. Two short-range radar sensors mounted on the passenger side of the vehicle monitor up to a lane’s width, and deliver optical and acoustic warnings which alert the driver to the presence of cyclists, pedestrians or other vehicles.

“We’ve not needed to go elsewhere for safety features, thanks to the impressive list of standard equipment and options provided by Mercedes-Benz,” continued John Rhodes. “Given our Duty of Care, it’s reassuring to know that the vehicles we’re sending out each day are so well equipped to protect not only the colleagues who use them, but also other road users.

“As for the crews themselves, they love their Econics. Apart from providing excellent visibility, the cab is air-conditioned and roomy with lots of storage space, while the fact that it employs full air suspension means the ride is smooth and comfortable.”
North Warwickshire maintains the fleet in its own workshop but relies on Midlands Truck & Van for warranty and technical support, and parts deliveries. “The Dealer is very good; I can’t fault its back-up,” added Mr Rhodes.

“We run our Econics for seven years and experience has proved that they’re built to stand this test of time. In the past, it’s always been the bodies that have started to fail before the chassis, so we’re looking forward to seeing how these new CPD Titan compactors perform over the lives of the vehicles.” 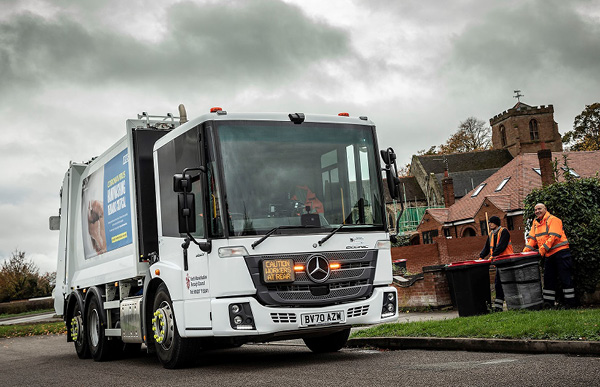 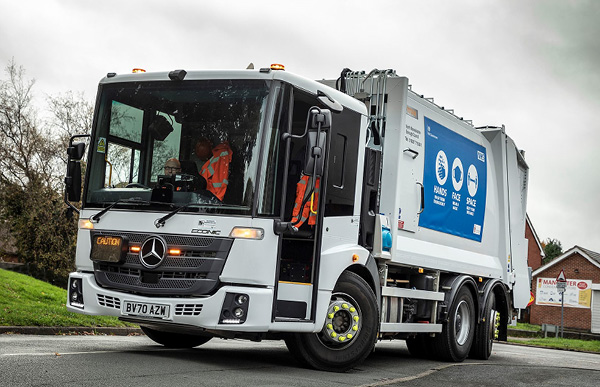