A far cry from the traditional truck and van outlet, the £7-million development on Cornwall Road, Smethwick, welcomed its first customers last month (December). Managing Director Steve Hunt declared: “This project has underlined our commitment to keeping businesses moving. We’re very proud of our new dealership, which is right up there with the best in the industry.”

Formerly the site of a steelworks, and then a plastics factory, the new build features an open plan reception area designed and furnished in line with the latest Mercedes-Benz corporate standards. The seven-acre plot offers plenty of space for displaying new and pre-owned vehicles, and – crucially – for customers to manoeuvre and park their own trucks and vans.

“We’ve already received a lot of positive feedback on the amount of room we have here, as well as on our excellent location close to the M5 and M6 motorways,” continued Steve. “This substantial investment reflects the ever-increasing demand from operators of Mercedes-Benz and FUSO trucks, and Mercedes-Benz Vans. We now look forward to surpassing their expectations in terms of the quality of our service.”

Midlands Truck & Van is the first member of the manufacturer’s commercial vehicle network to introduce a new customer experience concept which is already in operation at a number of Mercedes-Benz car outlets. Visitors to the site are greeted by dedicated hosts, then introduced to other members of the team with whom they can discuss anything from a sales enquiry to a service booking in stylish, relaxed and comfortable surroundings.

The drive-through workshop incorporates an Authorised Testing Facility (ATF) on which inspectors from the Driver and Vehicle Standards Agency (DVSA) will undertake truck MOT tests. There is also an ADR bay allocated to work on fuel tankers and related specialist equipment for transporting hazardous loads, and another for the installation and calibration of tachographs.

A further 11 truck bays – each, at 24 metres, comfortably long enough to accommodate an articulated tractor unit and semi-trailer combination – and eight van bays are available for routine maintenance and repairs. Midlands Truck & Van’s own technicians carry out MOT tests on light commercial vehicles in the Class 4, 5 and 7 categories, at times – night or day – best suited to customers.

At 650 square metres the new Parts department offers a 25% increase on the shelf space available at Midlands Truck & Van’s previous branch in Saltley. This allows it to carry correspondingly wider and deeper stocks of the factory-approved spares it needs to keep vehicles out on the road and earning for their owners.

Impressed customers include Neil Davies, who works out of the Hams Hall rail freight terminal and brought his Actros tractor unit in to get a faulty bulb spring replaced. “It was an easy job, all sorted in 15 minutes,” he reported. “I’d have been held up a lot longer at the Dealer’s old site, though, simply because they were so short of space and it was invariably rammed. The fact that we now have plenty of room in which to turn around makes life so much easier for a driver like me.”

His comments were echoed by Mohammed Abid Shan, who was being collected by a colleague after dropping off his Mercedes-Benz Sprinter for routine maintenance. “This new Dealership looks brilliant,” he enthused, “a massive improvement on the old place, where it was always a bit awkward getting in and out.”

Steve Bartosik, of Service Tech, was at the Parts desk in the airy reception area. “What a really nice environment,” he commented. “There’s no comparison between this and the Dealer’s former premises.”

The Smethwick opening marks the completion of a major programme of investment in its branch network by Midlands Truck & Van, one of two Mercedes-Benz commercial vehicle franchisees owned by Northern Ireland’s Ballyvesey Holdings Group.

It recently spent £3 million on acquiring and transforming the former Mercedes-Benz car outlet in Whitley, Coventry, into one of the country’s biggest Mercedes-Benz van showrooms. The Dealer’s former commercial vehicle centre next door is now a truck-dedicated facility.

Midlands Truck & Van’s purpose-built branch, in Willenhall, Wolverhampton, is also still relatively new, having opened at the end of 2015 at a cost of £4 million. 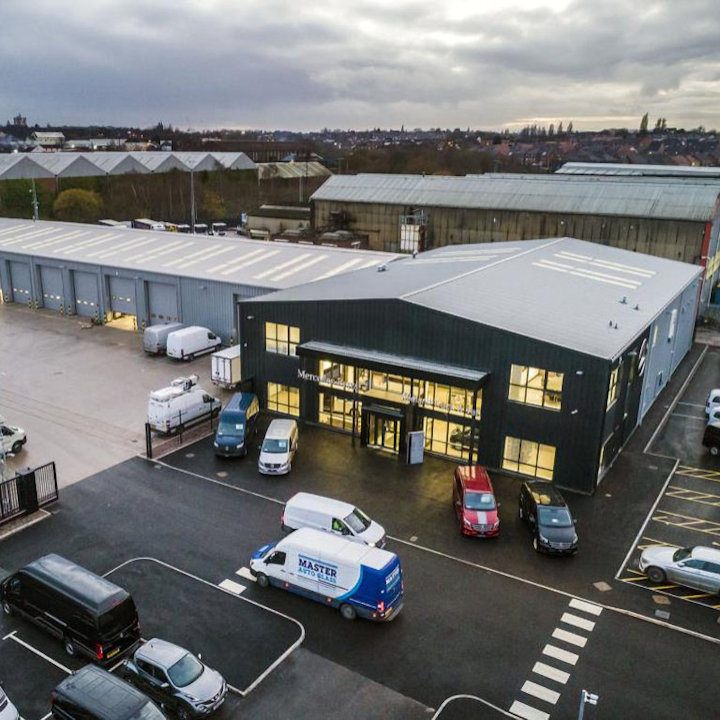