A chance encounter in a service station helped persuade Bromsgrove-based Watertight Management to switch from its previous van supplier to Mercedes-Benz.

Co-proprietor Tom Collings recalled: “A brand new Sprinter pulled onto the forecourt and as he stepped out to refuel I asked the driver what he thought of it. His reply was, ‘Perfect, they always are!’ He went on to tell me that in 20 years he’d never had a single breakdown.

“We’d already researched the market, tried a Sprinter demonstrator, and received positive feedback from other operators, so were inclining towards Mercedes-Benz anyway. That guy’s wholehearted endorsement of the product convinced us to go ahead and place our order.”

Watertight Management has since taken delivery from Dealer Midlands Truck & Van of eight Sprinters. All are medium-length 316 CDI L2 models with fuel-efficient 163 hp engines which drive the rear wheels – the Sprinter is also available with front-wheel drive.

Six of the new vehicles are high-roofed H2 panel vans, which were racked out to carry tools and fittings by Vantage VC, of Telford. The remaining two are chassis cabs with bodies by Ingimex, also of Telford – one is a dropsider, the other a tipper.

Established in 2010 by Mr Collings and his business partner Paul Castle, Watertight Management is a specialist contractor providing a wide range of clean and wastewater infrastructure services and road surfacing. Its customers include utilities companies, the Ministry of Defence, and local authorities, as well as commercial concerns and domestic users.

Watertight Management resolved to move to another manufacturer after its vans were beset by a series of engine failures, and it was left ‘high and dry’ by its supplier. It retains a number of these vehicles but plans to replace them with more Sprinters at the earliest opportunity.

“Our vans are heavily modified for the job,” continued Tom Collings. “We need them to be up and running, because a rental replacement for a vehicle which is off the road is not an option.

“Given the bad experience we’d had with our last vans, the Sprinter’s unrivalled reputation for reliability, and the round-the-clock back-up provided by Mercedes-Benz Dealers, were the key factors behind our decision to go with the three-pointed star.

“There were others too, though. Watertight Management has an outstanding safety record and a firm ‘zero harm’ commitment, so we were impressed by the market-leading array of accident prevention technology that comes as standard on the Sprinter.

“It’s a very modern vehicle, and exceptionally comfortable too. We had a bit of a backlash initially from one or two of the drivers who had reservations about our decision to switch brands. The doubters were quickly won over, though, and they all want a Sprinter now.”

The Mercedes-Benz also represents a step forward in terms of its towing capability. Watertight Management regularly uses its vans to pull trailers which carry equipment and plant, including excavators.

“The vehicles we’ve been using have a maximum gross train weight of 6.3 tonnes, which has meant that we’ve often had to make compromises over what we can carry,” explained Mr Collings. “For example, we have a directional drilling rig which is a pretty substantial piece of machinery that’s capable of drilling underground horizontally for 100 metres. Put that rig and its ancillaries on a trailer and it weighs 3.46 tonnes. We could tow it previously, but in

order to do so we also had the hassle of removing kit from the van to ensure the combination didn’t exceed the permitted 6.3 tonnes.

“By contrast, the Sprinter with uprated coupling offers a 7.0-tonne gross train weight. This represents a very useful increase in payload capacity, not least means because it means we can tow our drilling rig while keeping the van itself fully loaded to its 3.5-tonne maximum.”

“The emergency back-up and Midlands Truck & Van’s round-the-clock servicing capability appealed strongly,” added Mr Collings. “I’m very demanding when it comes to customer service, but the Dealer has been flexible and responsive, agreeing, for example, to our request for an extension of the demonstration period. We couldn’t have asked for more.” 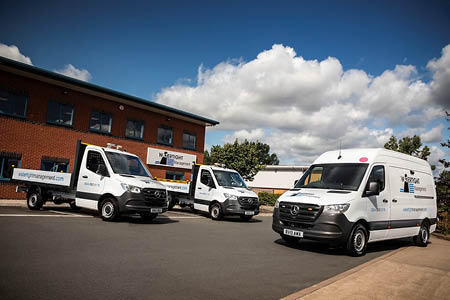 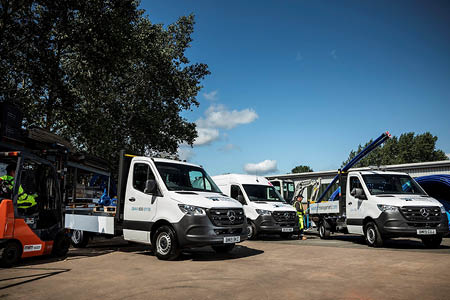 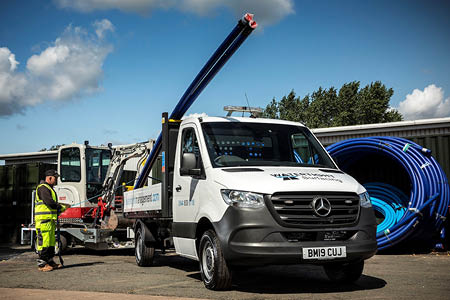 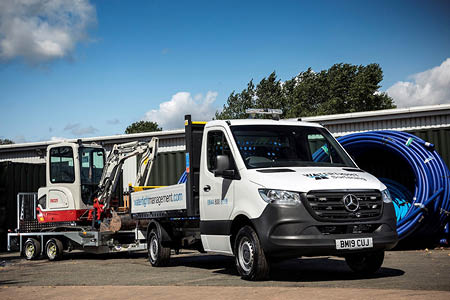 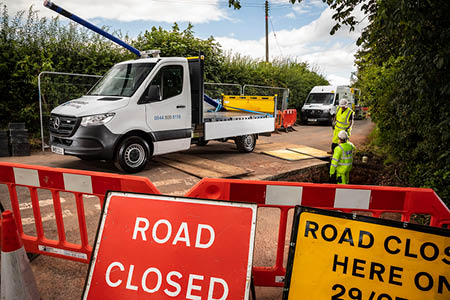 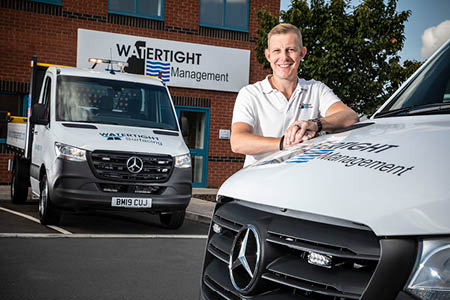